March is the time to head East: to the Norfolk and Suffolk Narrow Gauge Modellers Exhibition in Beccles.

I made a day of it. First, I headed into Lowestoft for a walk on the beach, a bacon sandwich and a visit to Parrs Model Shop. Parrs is a great place. Very well stocked, with friendly staff who are happy to let you browse or to help you. It’s well worth a visit if you are in the area. I left with track, a few building kits and some spray paint for a future project. (More on that another time 🙂 ).

It was a short hop to Beccles. The exhibition was very good with 13 layouts, 3 traders, 3 societies, a modelling demonstration and a modelling competiton. Here are some of the layouts that I managed to photograph.

‘The Brickworks’ an O-14 layout (1:43 scale, 14mm gauge), created by Bill Corser and exhibited by Barry Weston, represents a small brickworks on the edge of a town. It’s a clever combination of countryside and industrial scenery. I was very taken by the little Ruston loco and the skip wagons.

Barry showed me a couple of Simplex locos he’s made from 3D printed bodies mounted on Locos n Stuff motor bogies. Barry’s spray painted them and weathered them with inks of various colours. Nice job, they look great.

I saw ‘Caroline Concrete Works’ by Graham Morfoot at the Festival of British Railway Modelling but I didn’t get a chance to take a close look. This time I did. It’s based on a real concrete works at Tallington near Stamford. The original has standard gauge sidings. By imagining the works had a narrow gauge system, Graham has created a great shunting layout. The layout is nicely detailed, with attractive industrial stock and cast concrete loads dotted around the yard. The concrete objects were cleverly made from wood or cardboard. The layout uses Kadee couplings and I was impressed by how well they operated. Graham and Shaun were very helpful and gave me lots of good advice on Kadees. Thank you guys. 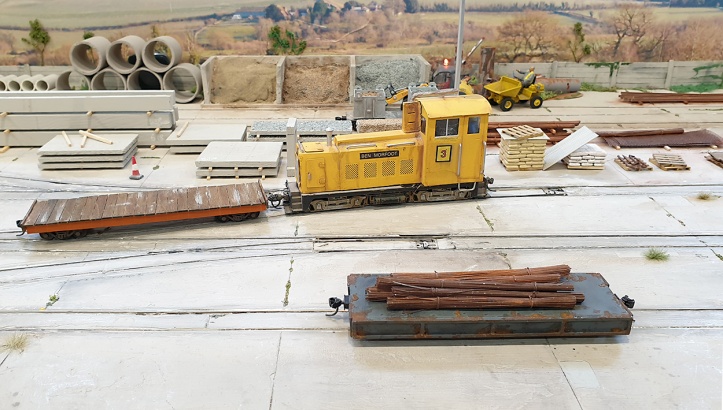 Chris Ford brought his 009 layout ‘Orne’ that’s set in the rolling hills of mid-Sussex. Chris is a master of understated modelling. This is a compact layout isn’t packed with cameos or animations. It really captures the atmosphere of a narrow gauge line that has (just) survived into the 1940’s. I’ve followed Chris’s blog for some time and I found his book on Modelling Narrow Gauge Railways in Small Scales very useful so it was a pleasure to talk with Chris. We discussed blogging, modelling and how to get more people engaged with the hobby. I think we put the modelling world to rights 🙂

Finally, ‘4000 Yards – Area 5′ by Kelvin Barnes. This 16mm (1:19) scale layout represents the World War 1 two foot gauge lines that served supply depots. Situated 4000 yards from the front this was the nearest a light railway was allowed to run from the front line. The layout design is incredibly simple, just three lines of track linked by a traverser. Yet this is a highly detailed and very effective model.

The rolling stock is big… and beautiful. I’ll let you admire it. 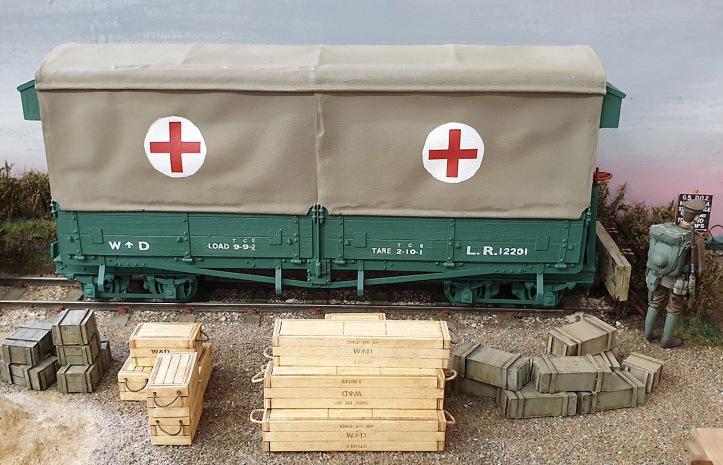 Many thanks to the Norfolk and Suffolk Narrow Gauge Modellers for organising such a good show.