Fun at the Festival 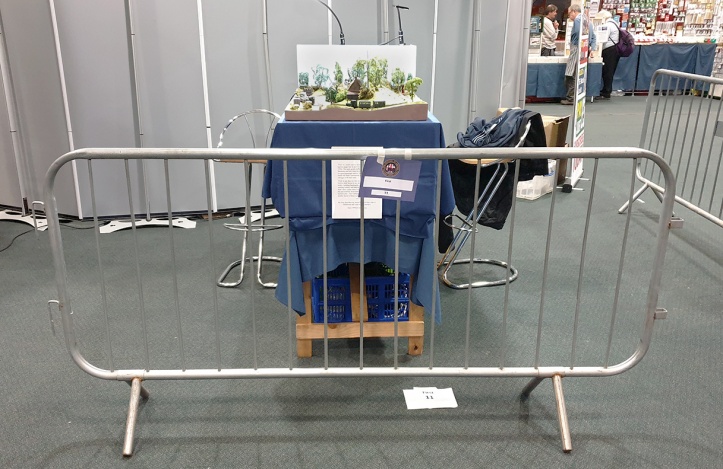 Last weekend was The Festival of British Railway Modelling. My little layout had a good pitch, off of the main hall and behind the BRM stand. At 31 inches long by 23 inches wide (78x58cm) it was rather dwarfed by the vast space and the crowd barrier 🙂

On the evening before the show I asked Phil and Andy from BRM whether I should remove the barrier, they advised me to keep it because “people like something to lean on when they are looking at layouts”. How right they were!

There were lots of lovely layouts, some very large indeed. I was next to James Street by Steve Wright. It’s a huge N scale layout that’s 60 feet (18 metres) long with a four track mainline, a dockyard, two goods yards and a large terminus. Impressive stuff…. 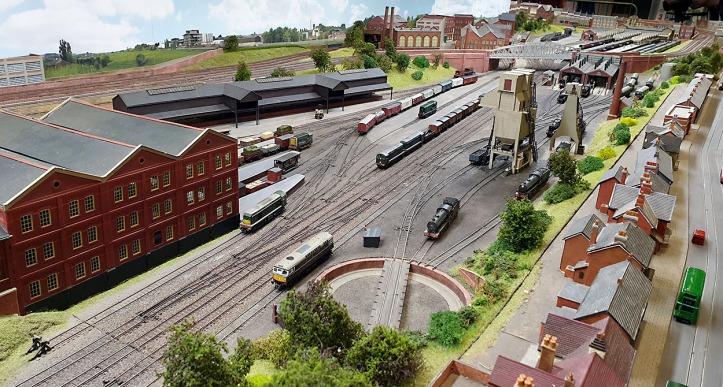 Another large layout, Chris Mead’s ‘Overlord’, is based loosely on Southampton and Portsmouth dockyards and shows the hectic quayside activities around the time of the D Day landings. The number of OO scale models, including trains, boats and military vehicles, is incredible. It is hard to imagine the number of hours of modelling that have gone into this layout.

There were even locos loading wagons inside the ships!

The large layouts were superb but I found myself drawn to the smaller layouts. This is the Amalgamated Wagon Works by Ben Lord. It’s a small wagon repair shop in O gauge, set in two time periods, 1932 and 1963. It was 1932 when I visited 🙂

All the buildings are scratch built from plasticard and the building on the left is covered in scribed DAS clay.

Richard Holder’s Wantage Tramway imagines the standard gauge line to the town of Wantage had been built as a narrow gauge line in 2 feet 3 inch gauge.

I like the canopy covering the line in the platform, a feature of the actual line that Richard has recreated on his layout.

The activity in the yard is very nicely modelled.

SHWT represents a line serving the sand and gravel pits near Tewksbury in the 1960’s. It has been closed to passenger traffic but sand, mixed goods and coal trains still use the line

Built in EM by John Chivers is has a beautiful spacious atmosphere that I found very attractive. 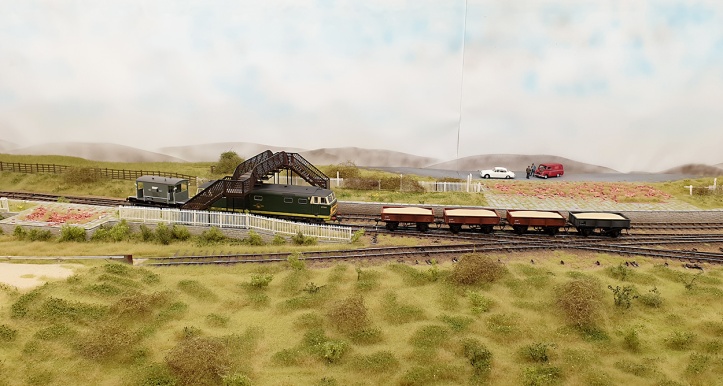 Finally, possibly my favourite layout of the exhibition, Lydham Heath in S scale. It was built by Barry Norman then rejuvenated by Simon Dunkley and represents the Bishop’s Castle Railway. This independent minor railway opened in 1865, before the Light Railways Act, and ran until 1935 without being absorbed into the ‘big four’.

At 1:64 scale, with a gauge of 22.4mm, it’s not a common scale for model railways and I don’t think I’ve seen a layout in this scale before. It wasn’t the rarity factor that appealed to me though. It was the isolated, rural atmosphere and the lovely modelling.

Plus there isn’t one figure on the whole layout! Yet this works. It really does look like a neglected rural railway where nothing much happens and very few people travel.

Many thanks to David and Matthew for operating ‘First’ on the Saturday and allowing me to have a break. Plus special thanks to the BRM / Warners team for organising such a good exhibition and for being excellent hosts.

I had a great time at the exhibition. I really enjoyed meeting and talking to everyone. If you popped by the layout for a chat, it was a pleasure to meet you !