Today the Royston and District Model Railway Club held their 33rd annual exhibition. (Yes, really, their 33rd). It was a huge exhibition with 25 layouts, 12 traders and 13 societies / demonstrations. It must take a lot of organisation and many willing volunteers. (I counted 12 people helping with the catering at lunchtime – and that’s just for the lunches!). I’m pleased to say it was packed with visitors and I hope it was a bit success for the club.

Here are some snaps of some of the layouts.

Cheffley by Mike and Jenny Carter, an 00 layout (1:76 scale), is a sleepy town served by the Southern Railway in the late 1930s. Eagle eyed readers will notice the station buildings are still painted in LSWR colours, due to lack of funding.

I was particularly impresed with the buildings at the back of the layout. A great variety of styles and very well modelled.

At one end of the layout is this canal scene. Not a railway in sight but very atmospheric.

Again, I really liked Peter’s buildings. Look at this lovely half timbered house.

And these mills or warehouses.

Continuing the structural theme, Paul Bason was giving a demonstration of modelling buildings and scenery. Paul wasn’t on his stand when I visited which was a pity. I’d love to have learned how he makes the thatch, the ornamental ridges, liggers and spars that hold the thatch in place. Great modelling. 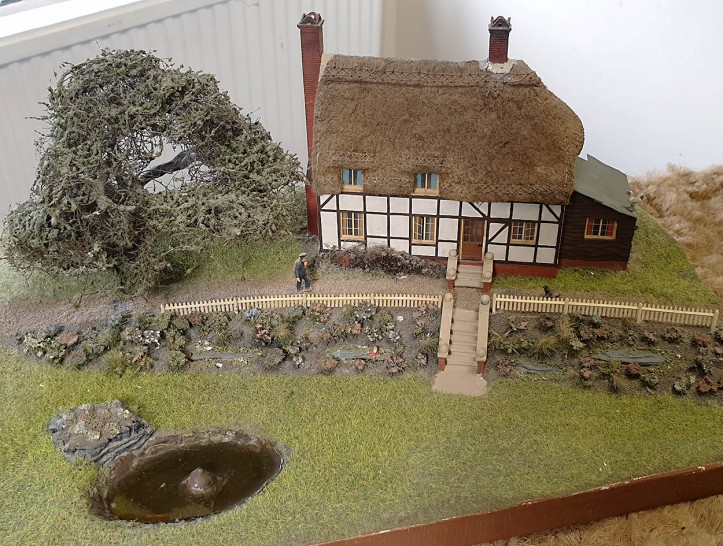 Troble Mill by Roland Bourne is an 009 layout in a box file built made from a downloadable card kit from Scalescenes. I must admit I have been looking at this kit and wondering whether it would make a good 009 layout, Roland has showed that it does. 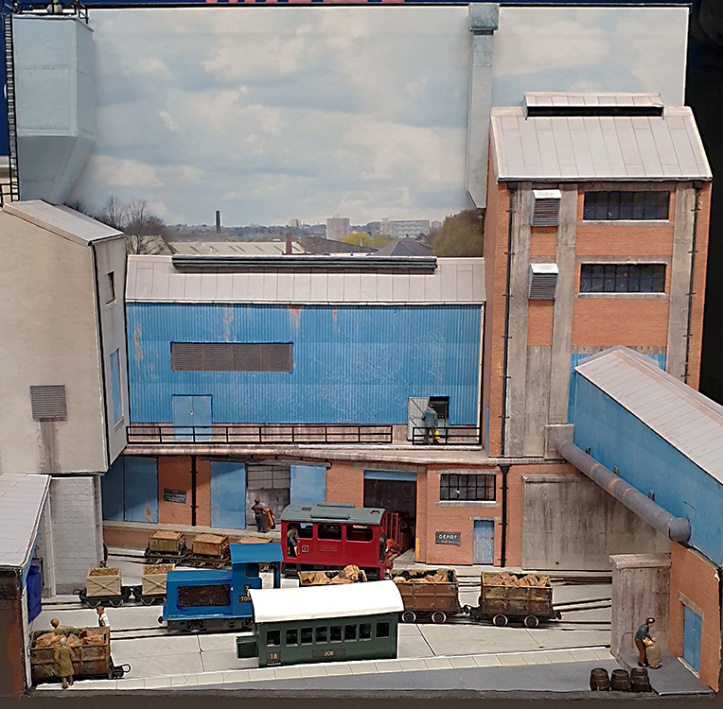 How about a layout in a briefcase? 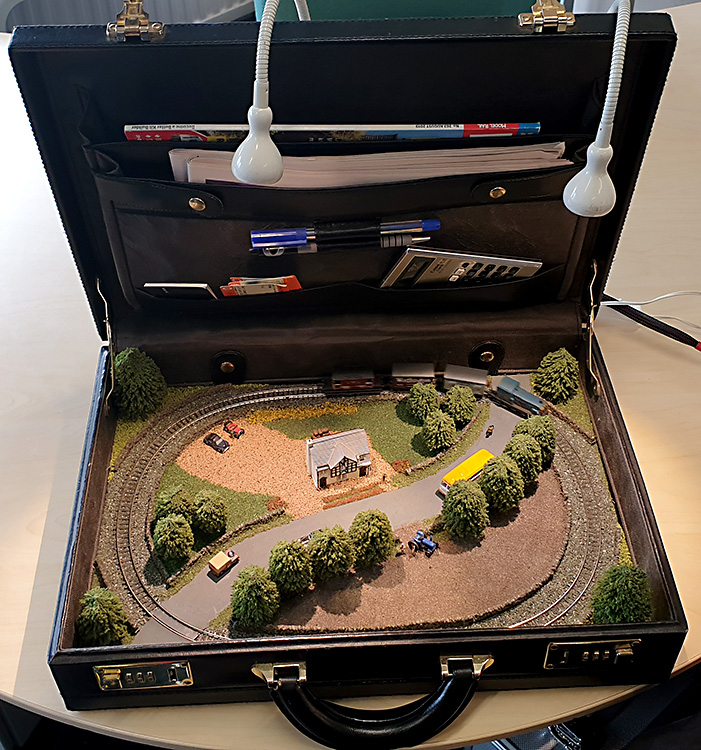 It has working street lights and working carriage lighting.

Despite the minimal depth of the case Ian has created three levels of scenery. The canal forms the lower level, next the railway line and finally the road overbridge forms the uppermost level. Neat work.

We often hear about ‘pizza’ layouts (circles of line in the space equivalent to a pizza box), well Ian has built a layout in a coconut (!)

Finally, Kamiak Falls by Antony Quinlan. This layout was an unexpected surprise, and probably my favourite of the exhibition. It’s a HO scale (1:87) layout featuring a fictional town in the Palouse area of eastern Washington State in the 1970s. It shows the early stages of the Burlington Northern (BN) railroad.

I did like the autumn colours, the rolling stock and the subtle, but effective, DCC sound.

Antony’s modelled a lovely grain store in the middle of the layout. Then he had the courage to place a line of trees in front of it. It works well, making the scene look very natural. Plus, it slightly masks the trains giving the viewer the urge to look beyond the trees to see what’s happening. Perhaps that’s why I spent so long admiring this layout….