Last Saturday the Royston and District Model Railway Club held their annual exhibition. The Royston club exhibitions are always enjoyable. They have a good selection of layouts, strong trade stands and an excellent book dealer.

This year, to add the icing to my cake, the exhibition had several narrow gauge layouts. I spent an enjoyable few hours exploring, talking to people and taking some photos using my mobile phone. Here a selection of the snaps.

I saw Mers-Les-Bains for the first time a couple of weeks ago at ExpoNG. It was great to see it again so soon. Look at the lovely teak coaches at the top of this blog.

The atmosphere Peter Smith has created is superb.

This time I managed to get photos of Peter’s tasty tram locos. 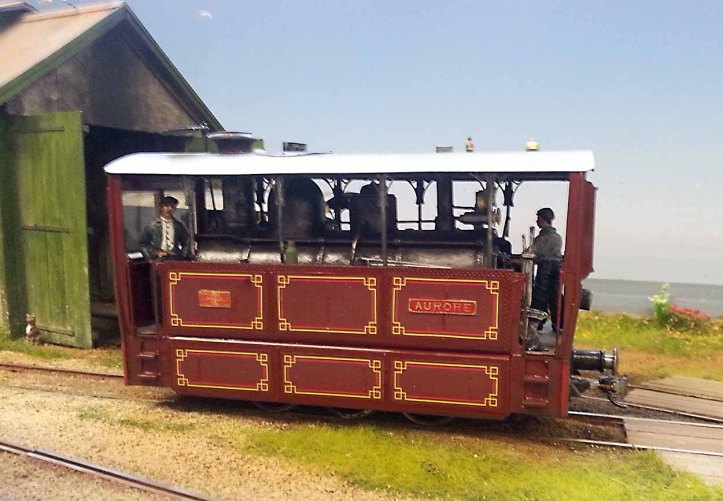 009 was very well represented. This is Butley Quay by Peter Rednall an imaginary narrow gauge line set in East Suffolk. 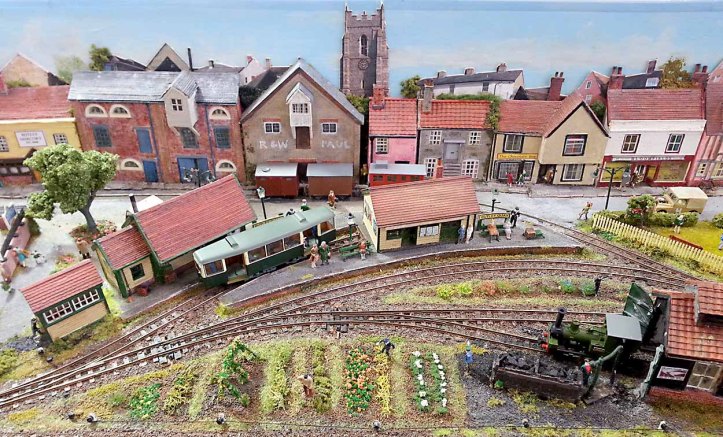 Coleford by John Wilkes is based on a real railway in the Forest of Dean. John has imagined that the original 3 foot 6 inch gauge line has be regauged to 2 feet and serves a more diverse range of industries including gold processing, fashion clothing and a chocolate factory. It is great to see a layout set in winter.

Unfortunately, the fly tippers have arrived in Coleford…

He made this by modifying two standard points and merging them together. Nice! (This is my snap of a photograph on John’s display board – I hope you don’t mind John). 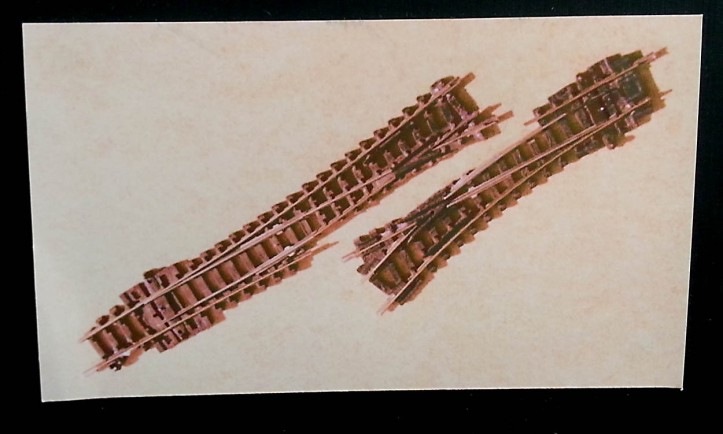 Paul Sutherland was exhibiting his H0e model of the Mariazelbahn in Austria, called Gusswerk. This layout is set in the winter too. However, as this is Austria there is lots of snow which Paul has modelled very effectively.

The Chelmsford MRC were showing ‘That Dam Railway’. This is a very large and impressive layout. They were even running a ‘Thomas’ special! More photos of this layout here. 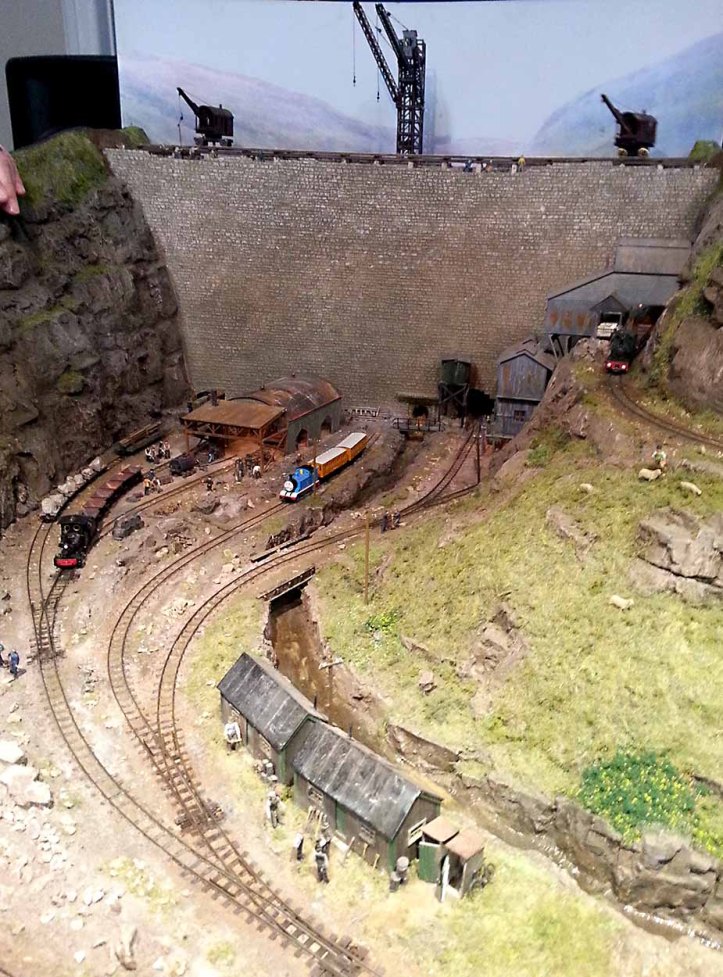 Moving from the very large to the rather small, here’s a layout in a suitcase. 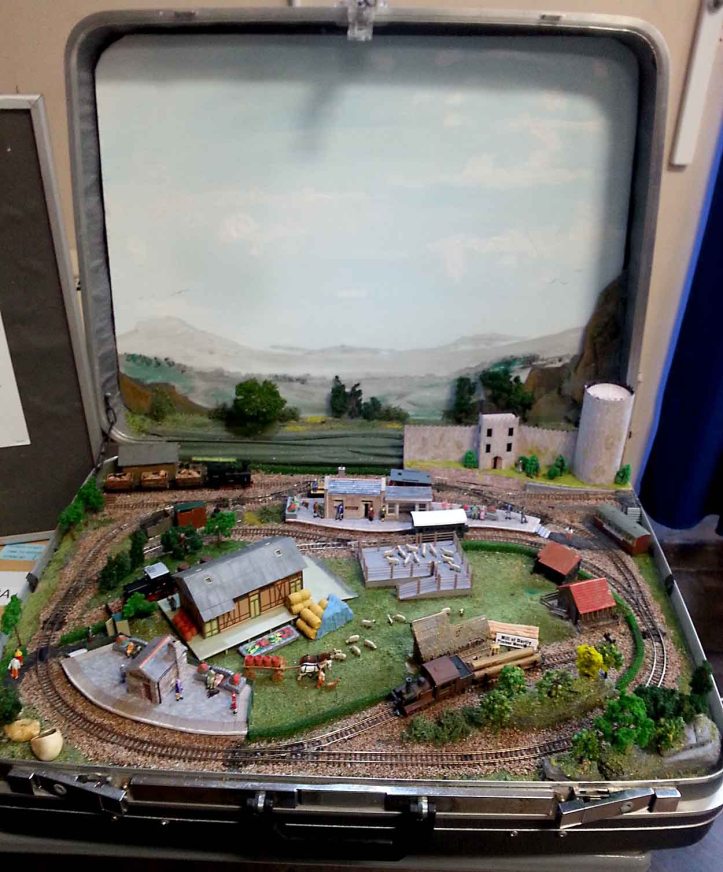 Roland Bourne’s Strathbogle has lots of operating potential. He normally fits a three track fiddle yard on the side as well.

Orford Quay and Wickham Market is a layout that I haven’t seen before. It is a fictional line that imagines the Great Eastern Railway opened a narrow gauge line to compete with the Southwold Railway. Brian Bassington has captured the atmosphere of the east of England very well.

My favourite part of the layout is the middle sections that linked the Orford Quay and Wickham Market termini. (I wasn’t fast enough to freeze the train!)

I thought the river scene was particularly well modelled. 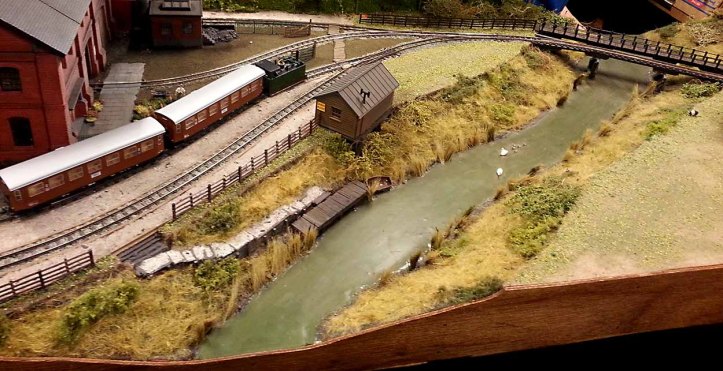 It was a pleasure to see Scrubs Lane and the Maltings by Ken Paul again. This is the Scrubs Lane section, depicting a small industrial yard in the 1930’s.

This is the quay section where the goods transported by the railway are transferred to the ships for export.

This layout has lots of lovely scenes throughout. This country lane really appeals to me.

Three standard gauge layouts caught my eye. I liked two of them because of their attractive backscenes.

This approach created a real sense of depth to the scene behind the railway.

In Koln Westbahnhof, Brian Silbey used quite deep low relief buildings, a silhouetted city skyline and a very dramatic red sky. It’s a very unusual approach and I thought it had worked rather well.

Regular readers (both of you 😊) know I like small industrial layouts. Bob Vaughan’s 00 gauge Gas Lane uses a very simple track plan to create a compact industrial layout with lots of operating potential.

The aerial view doesn’t do the layout justice. When you drop down to eye level the magic kicks in. Who could resist a scene like this?

It has a real sense of depth. Nice modelling!

The Royston exhibition is my last railway outing for this year (unless I decide to go on a Santa special – which is unlikely!). Instead of going out, I had better get on with some modelling….