Expo Narrow Gauge, the UKs largest narrow gauge model railway exhibition, was held on Saturday. I was exhibiting ‘First’ which was well received and I’d like to thank everyone who dropped by the layout for their compliments, constructive criticism and excellent conversation. Special thanks go to Brian Key and Nigel Bartram who operated the layout allowing me to visit the exhibition.

ExpoNG was huge with with 19 layouts and 35 traders. I can’t possibly do justice to all of the great layouts, but here are a few that caught my eye and I was able to photograph. There were other layouts I liked that were so popular I didn’t manage to get near enough to take any snaps!

Firstly, The Yard by Martin Coombs was presented in a very original effective way and had some amazing animations. Obviously, the narrow gauge (O-16.5) and standard gauge trains moved, but so did the overhead crane and all of the road vehicles. It was fascinating to watch. 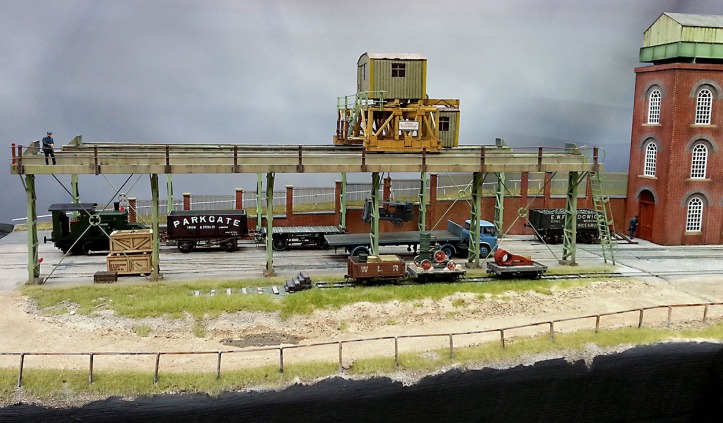 I enjoyed Empire a 00 scale, 6.5mm gauge layout by Peter Smith. I thought it was very well modelled and only after watching it for some time did I realise that it was radio controlled. Peter had removed the magnets from the Busch locos and fitted radio control receivers and batteries – no mean feat when you realise just how small the locos are. 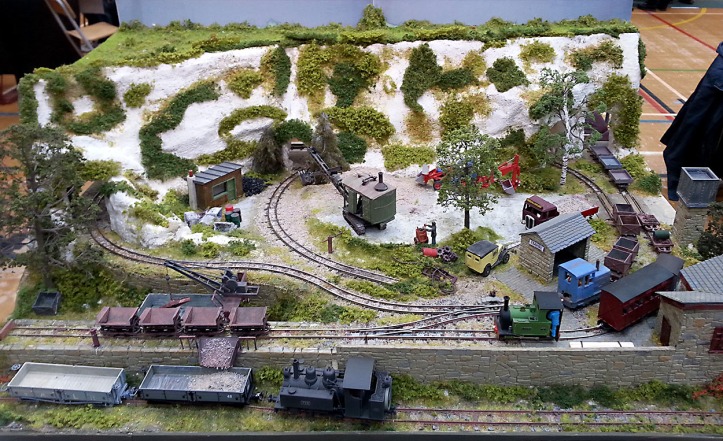 Continuing the theme of fitting impressive electrics into small locomotives. Tramfabriek was one of the smallest layouts in the show. It featured a lovely, small tram loco about 50mm (2 inches) long and running on DCC, with working lights and full sound. The sound cube was around 6mm (¼ inch) long and the quality of the sound was impressive. Exhaust sounds, whistles and braking were all represented and it sounded fantastic. The loco and DDC equipment are available from https://tramfabriek.nl/. 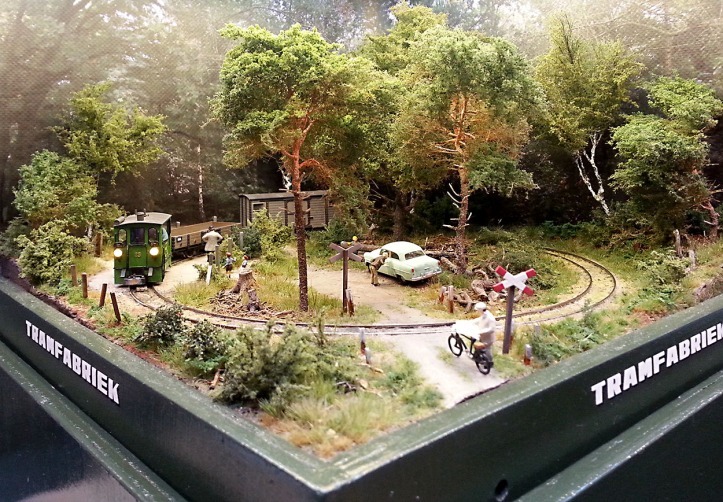 Scarside an 009 layout by Neil Briggs caught my eye. It is very compact at 36 x 8 inches (90 x 20 cm) and still has lots of operating potential. It was constructed using set track, many ready-made buildings and most of the stock was ‘ready to run’. I thought it was very attractive and demonstrated it is possible to make a lovely layout using commercially available materials. 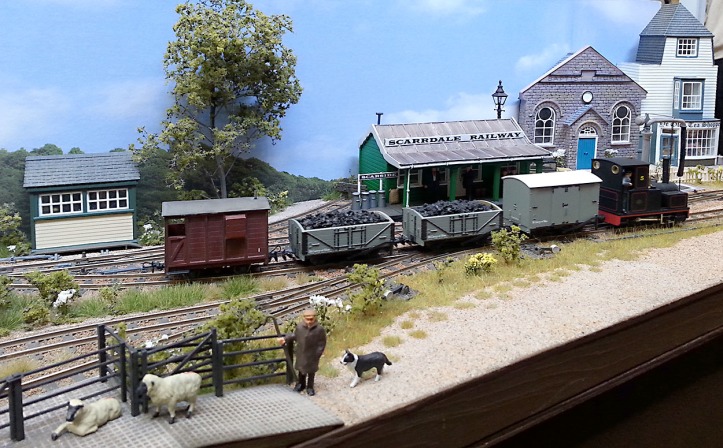 This year is the fiftieth anniversary of the Greenwich & District Narrow Gauge Railway Society that organise ExpoNG and the thirty-fifth ExpoNG exhibition. The club organised a competition to build a layout built in 50 x 35 cm to mark these two anniversaries. I’d been looking forward to seeing the entries and I wasn’t disappointed. The challenge made the modellers use their imagination and tested their modelling skills and all of the entrants rose to the challenge.

The winner, voted for by members of the G&DNGRS, was ‘Toot & Come In’ a Egyptian themed 1:32 scale model by Steve Pearce. Cleverly constructed, with a sense of humour. 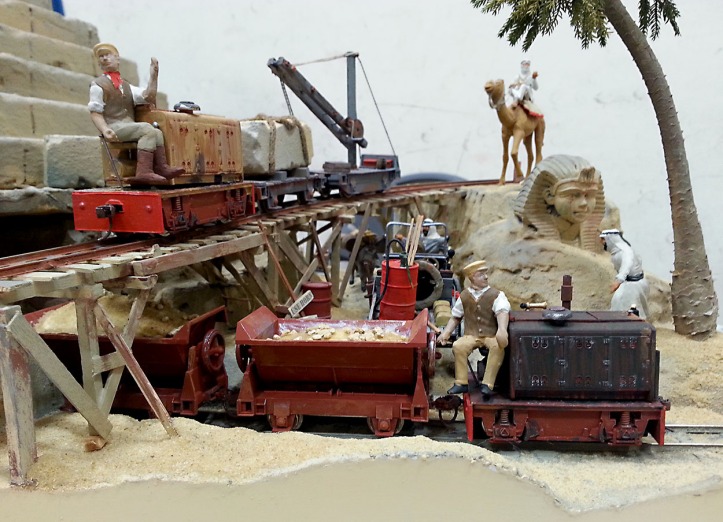 I was particularly impressed with Slugworth & Co by son and father Joshua and Michael Campbell. They had created a very nice double sided 009 layout which was very well modelled indeed. I was pleased when Joshua won a prize for his modelling – very well deserved. 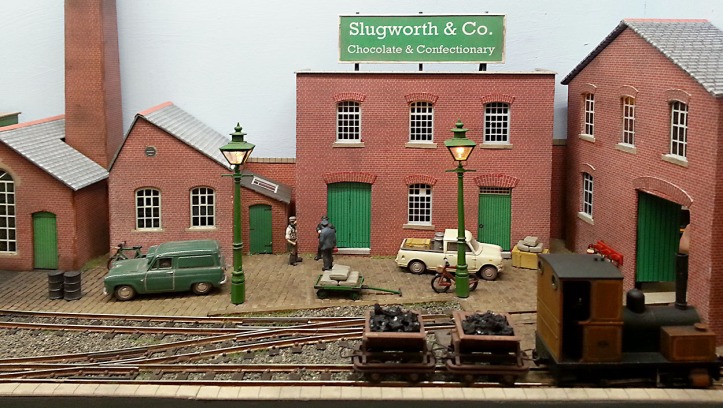 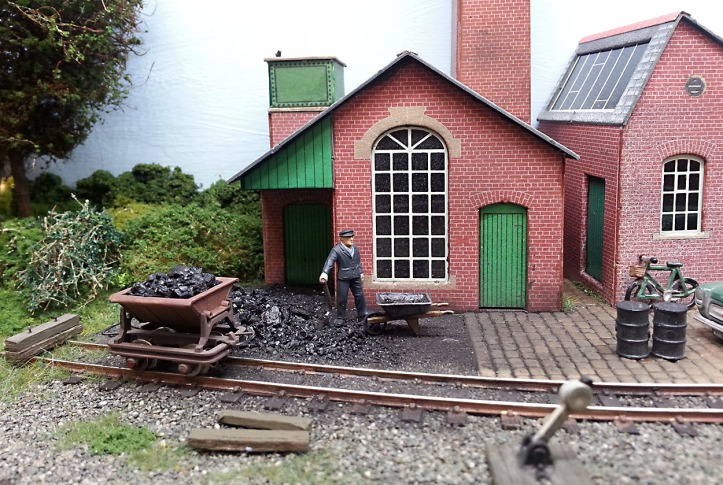 Continuing with the 50 x 35 competition entrants. I really liked St Petroc Quay by Harry Dawe. Harry had created a wonderful seaside atmoshpere and captured a real a sense of space despite the size constraints of the competition. I asked Harry how he’d built the buildings and I was suprised to learn that he’d used ‘brick paper’ for the brick walls and corregated iron roof. Sometimes, I think buildings built with brick paper can look like ‘new builds’. Harry had used weathering powders to give the buildings a nice ‘aged’ appearence. This is a technique that is well worth trying. 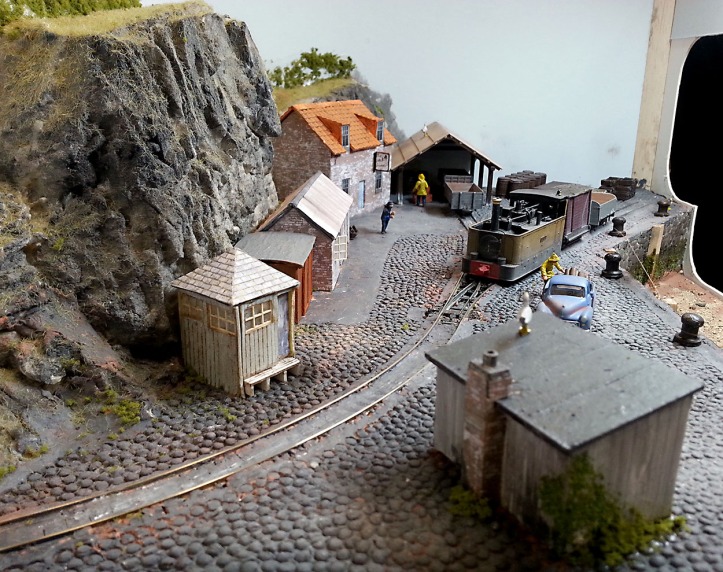 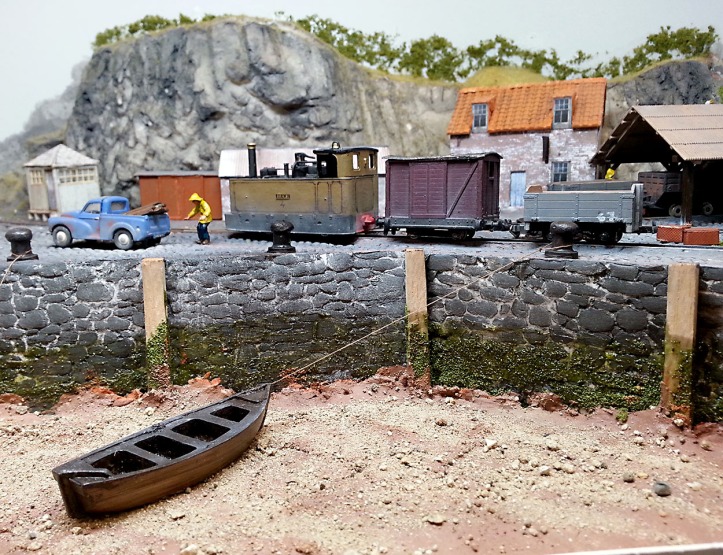 The smallest entry in the competition was Woody End by Richard Glover. It was fascinaing to see the loco navigating curves of only a few cm radius, and doing it successfully! 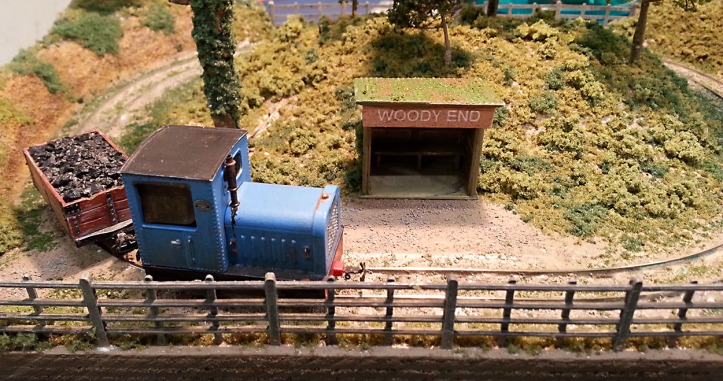 Christian Danziger and Ronny Rudolph had brought Bw Muldasgrun, an O-16.5 layout, all the way from Germany. It was beautifully detailed and very atmospheric. They let me practise my bad German (thanks guys 🙂 ) and told me they had transported the layout by airplane in their hold luggage (!). I’m pleased it survived. They did tell me they brought the loco in their hand luggage. I’m sure I’d have done the same…. 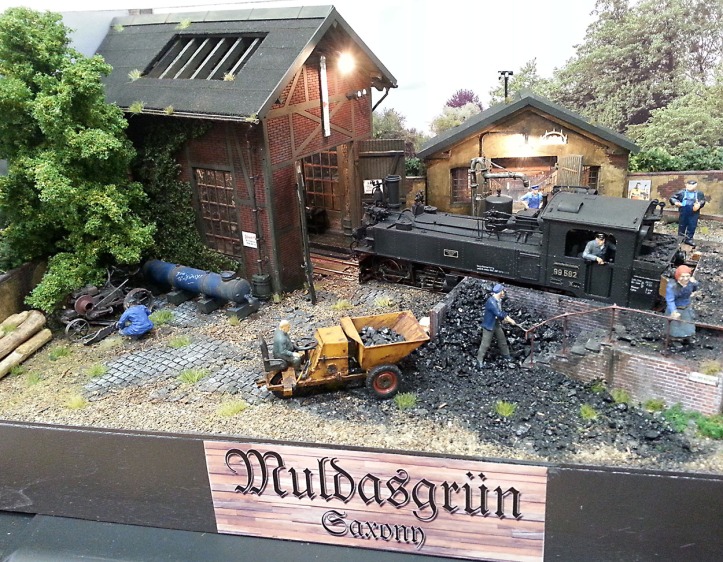 I was very pleased that Richard Doe won the Reinier Hendriksen Trophy for Shipmeadow. It is well imagined, well modelled and captures the atmosphere of a narrow gauge railway in wartime. I didn’t manage to photograph it on Saturday, but there are photos here.

One of the advantages of exhibiting is that you don’t get a lot of time to visit the traders and don’t spent too much money. I brought two seated O scale figures (from S&D models), a broken 00 scale loco body and a secondhand Peco O-16.5 tipper wagon kit (both from the 009 Society sales stand). I’m hoping the figures will become drivers for industrial locos, the loco body may be cut up to create an O9 loco and I will try to convert the tipper from O-16.5 to O9. These are long term projects, well, more like ideas that projects 🙂 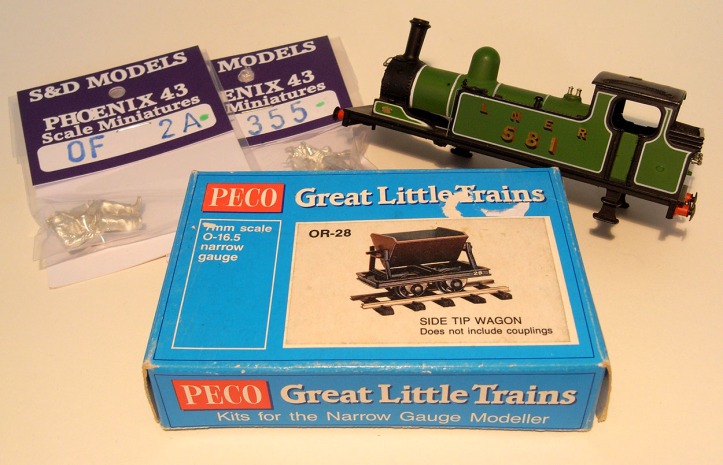 I really enjoyed Expo, I’d like to thank the organisers for inviting me, and all of the G&DNGRS members for being so helpful and making the day a real pleasure.