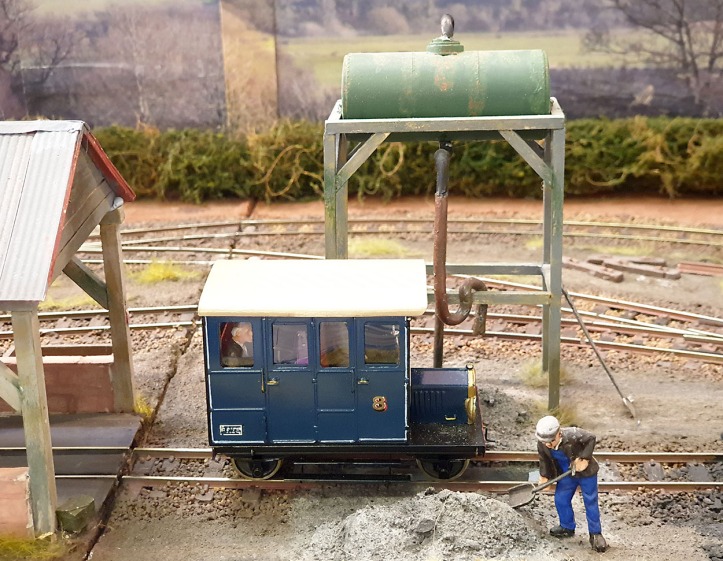 Extra special thanks must go to Sue, Matthew and Clive who worked all day to make the event a success… and they aren’t even members of the group!

We had a super selection of layouts. I don’t normally include photos of each layout when I blog about an exhibition but in this case I’ve included a description and photos of each invited layout, because they were all so good. So, in no particular order here we go…

Mulldale is a 7mm (1:43) scale industrial scene incorporating 16.5mm track (2 6” narrow gauge) set somewhere in Northern England in the late 50’s early 60’s. The  railway  serves  to  move  raw  materials/goods  around  the site  for  the  Mulldale  Brewery and Mulldale Castings & Engineering Co. and other small businesses set betwixt a canal and high-level  main line viaduct. This  layout,  with  the  exception  of  ancillary  vehicles,  is  kit/scratch  built  with no  prototypical references. 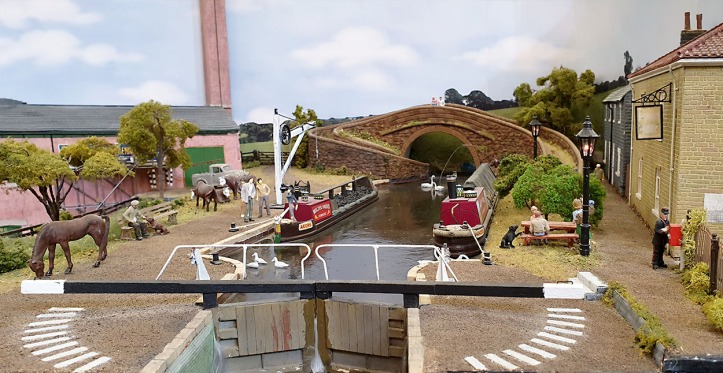 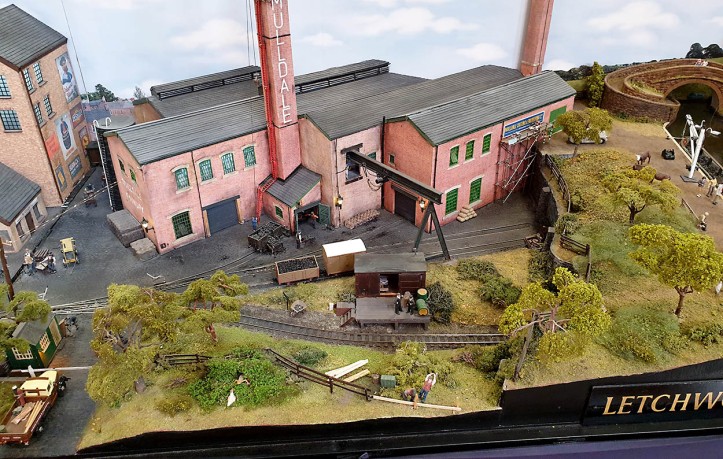 My journey into 00 6.5 began with the purchase of a Busch Hof starter set. It led to the first phase of my Hof layout Oresome Aggregates and it was later extended and exhibited at Narrow Gauge South in 2017. The scale fitted in perfectly when we downsized our home in that year.

In 2018 on a shopping visit my wife found a small portable picnic table and suggested it might make the basis of a layout. It became the 00 6.5 layout Empire, named after James Hilton’s first steam loco kit in that scale and it appeared at Expong in 2018. Both layouts are described in the online forum Narrow Gauge Railway Modelling.

Originally 47 cm deep and 60 cm wide it has (like Oresome) now been extended to 80cm wide It represents a run down 1950s industrial complex in a location like Amberley chalk pits with an 18 inch gauge railway. Via the forum referred to above I was introduced to radio control in 00 6.5 and all my locos are now R/C. After a lifetime of modelling I am now enjoying a more relaxed and fun hobby reliving some of my early experiences looking for industrial railways in their closing years. 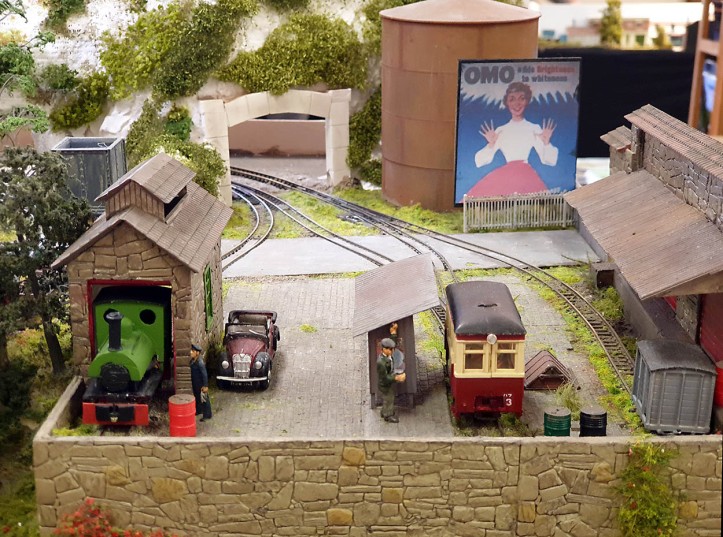 Watchet  Town  is  a  station  on  the  “what  might  have  been”  Bridgwater  to  Minehead  line.    The barrier of the Quantock Hills meant that the costs for the standard gauge line proposed proved to  be  too  high  but  the  model  is  based  on  the  assumption that  a  narrow  gauge  and hence cheaper alternative was put forward, accepted and built.

The model is of Watchet Town station, just to the south of the town itself.  A branch to Watchet Harbour  is  a  short  distance  from  the  station. As  well  as  through  trains  from  Bridgwater  to Minehead and a few trains which terminate at Watchet, there is a shuttle service to and from the harbour.  Space at the harbour is very limited, so the locomotives based at the harbour have to travel  to  Watchet  Town  for  coal,  water  and  routine maintenance  which  accounts  for  the locomotive servicing facilities not usually seen at a through station.

Appleton Dene depicts a narrow gauge line running through a station and providing rail access to a factory and a builder’s yard during the 1930s. The rolling stock is either scratch built or from modified kits and features some interesting wagons, carriages and locomotives. The buildings are also scratch built using a variety of techniques.

The original layout featured in the November 2013 issue of Railway Modeller but has since been extensively modified to make it more compact. Pictures can be seen on the club web site: www.roystondmrc.co.uk

This layout was built to prove that a small 009 layout could be easily built with ready to use items such as 009 set-track and 00 buildings. It fits on a shelf but still has plenty of operational potential.

The Beds and Bucks members voted Scarside the Best Layout in the Show. Here is exhibition organiser Brian Key giving The Mark Howe Award to Neil Briggs. Perhaps we should invest in a bigger trophy 🙂

My intention was to try and build an operable working micro-layout without spending a large sum of money on materials but by re-using, recycling and upcycling readily available items. Total build cost has been very minimal. The only things I’ve had to purchase are glue and paint from my local Pound shop and a few electrical items from ebay.

Trackwork is re-used OO points and rail salvaged from donated second hand Peco code 100 flexitrack soldered to some copperclad sleeper strip cut from some offcuts of PCB that I’ve had for years. Buildings are made from a core of corrugated cardboard stuck together with a hot glue gun and covered in papier mache to strengthen it, while the ‘Stonework’ is individually cut pieces from various cereal packets and the ‘wriggly tin’ on the roofs is from tomato puree tubes cut into suitably sized sheets and ‘crinkled’. Doors and gates are made from coffee stirrers and the toolbox and bench in the shed are made from scraps of wood and firework sticks, other items are made from bits and bobs found in the scrap box. All the track ballasting is with various grades of tea-leaves and coffee grounds and the ground cover is home made from various materials and leftover paints.

A lot of fun has been had in the building of this layout and an extension is already being planned. 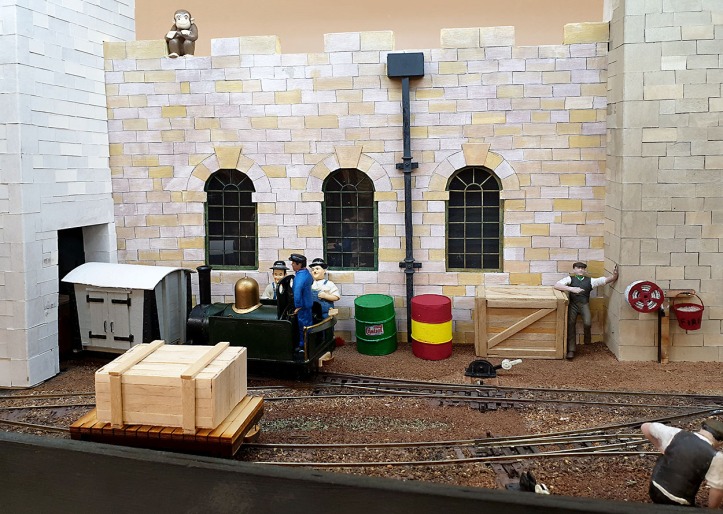 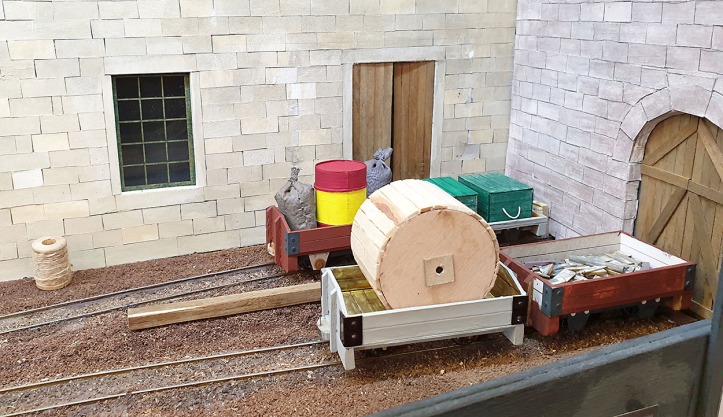 This version of Ynys Gwyntog is the late Bob Barlow’s 7mm (014) reimagining of the now legendary 60’s layout featured in Model Railway News, which inspired a great number of budding N.G. modellers. The original Ynys featured buildings which were not typical for the location, a shortcoming which Bob addressed in the new version whilst trying to stay true to the spirit of the model. Except for a little tidying Ynys is shown pretty much as it was left after the photographic session for NG&I Review No. 100 but some ideas for its future may also be on show. 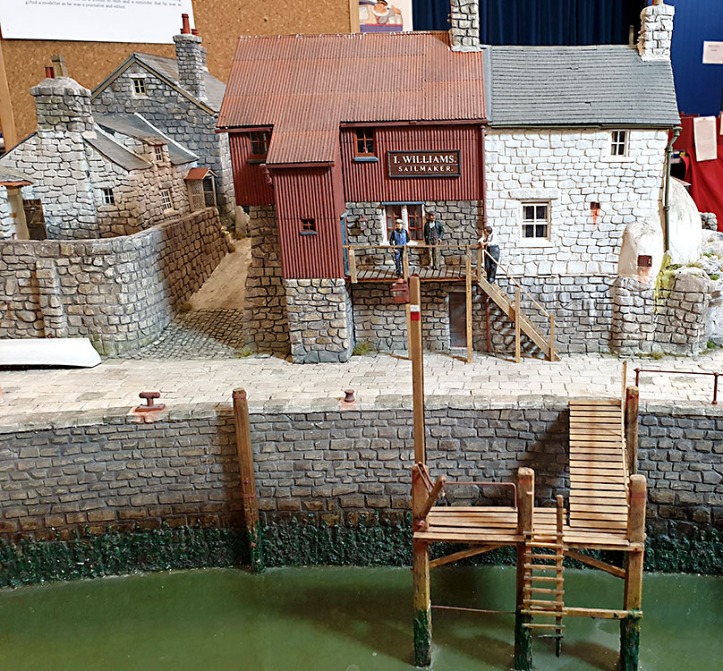 Heys Quay is set in the north west of England on the river Heys near where it meets the coast. Small fishing boats unload their catch and other goods some legal some not but the local bobby is watching. All set in the late 50s it has a good passenger service mainly with small locos and coaches. The layout is housed in an under bed storage box.

A small narrow gauge layout in 7mm/ft scale 16.5mm gauge (0-16.5). One side depicts an idyllic English village through station, the bright side, and the other contrasting side a slate works, the “satanic mills of North Wales” – the Dark Side!

Rösental is an imaginary through station on the Rätische Bahn (RhB), a modern electric metre gauge railway in Switzerland, famous for it’s “Glacier Express”. The layout (in progress) is set in the early 1980’s when the RhB was leasing the two Furka Oberalp Bahn (FO) tunnel locos and old green and now current red RhB liveries co-existed. All the locos and rolling stock are by Bemo. The layout uses analogue DC with a Gaugemaster W controller. The trackwork is mostly Peco with Peco point motors and the overhead catenary is by Sommerfeldt. The buildings are by Vollmer, Kibri and Faller and the static grass and other ground cover is mostly from GreenScenes. The owner is happy to discuss any aspect of the layout or modelling Swiss railways in general. 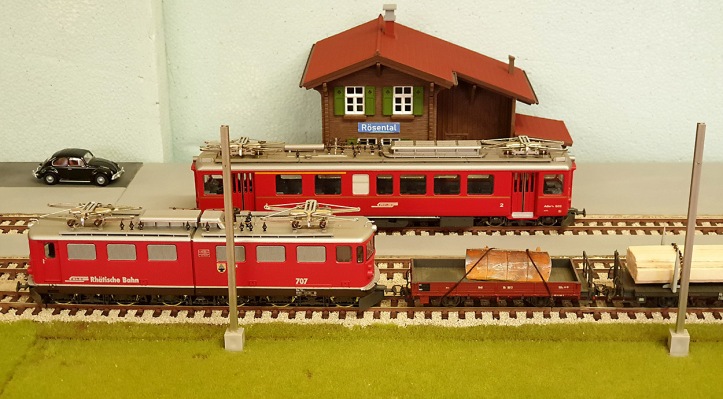 Brockles Ghyll is an intermediate station on the Yoredale Tramway, a roadside tramway in the Yorkshire Dales. There is a loop, allowing trains in both directions to pass, as well as a modest goods yard handling coal, milk and some farming supplies. The station is unstaffed: passengers purchase tickets from the guard and shunting movements are controlled by the train crew. Local farmers also load and unload the wagons if required.

Small models such as Brockles Ghyll are often referred to as micro-layouts. Their small size allows them to be completed in a reasonable time and they can be displayed at home without taking up an entire room. If the modeller has varied tastes in railways, several different micros can be built in the space occupied by one larger layout. For those interested in this concept I can recommend the Micro/Small Layouts website produced by the late Carl Arendt at www.carendt.com 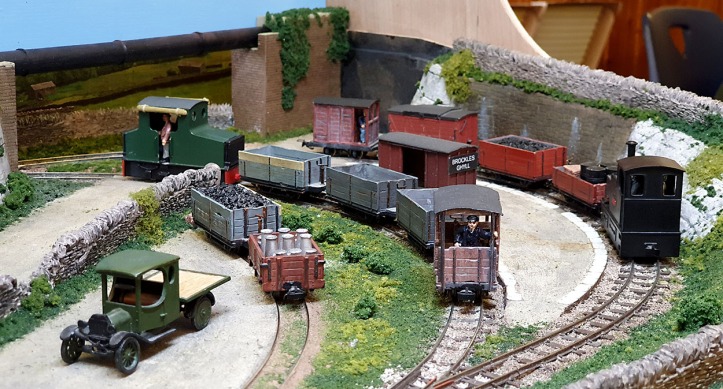 The societies and traders who attended were:

Roll on next year !