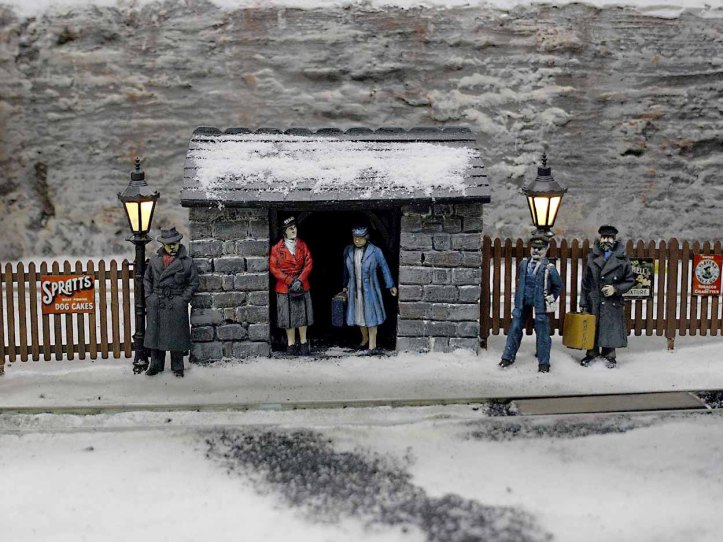 In early September the Bishop’s Stortford Railway Society held their exhibition. There was a nice mixture of layouts in a vast range of styles, scales and gauges. I’m pleased to say narrow gauge was well represented!

An overview photograph doesn’t do justice to the detail on the layout. Let’s start with the workbench outside the engine shed and the bushes growing through the abandoned car…

That doesn’t mean there isn’t time to relax. 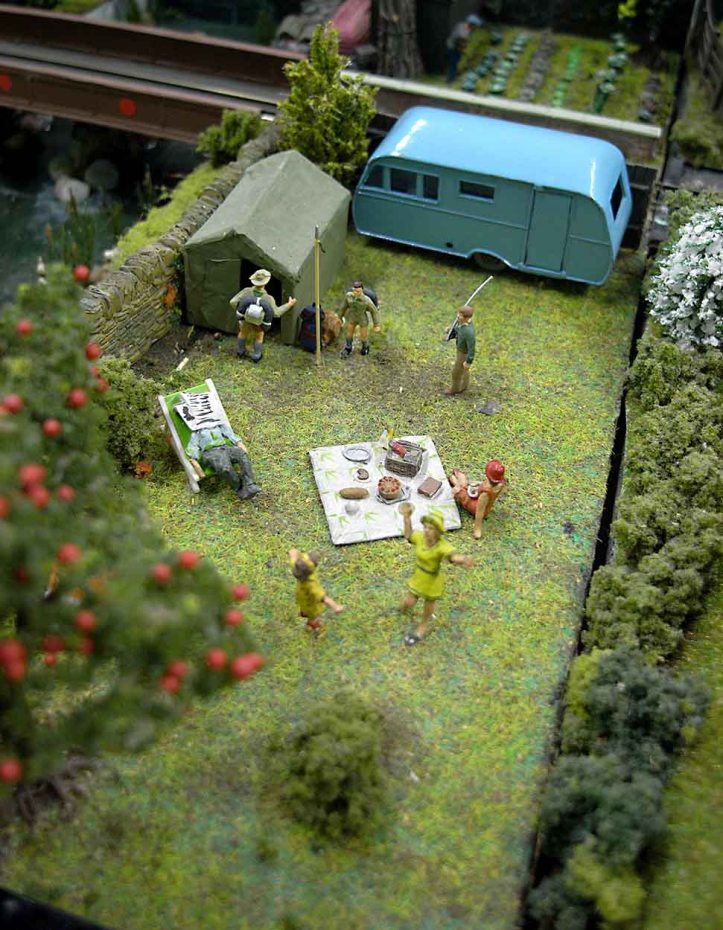 Moving on to Wales. I have seen videos of That Dam Layout but I’d never seen the layout itself. The 009 layout depicts a dam during construction and includes a massive dam wall with a stone quarry nestling in the valley below.

The cranes on top of the dam move and the detail in the quarry is impressive. 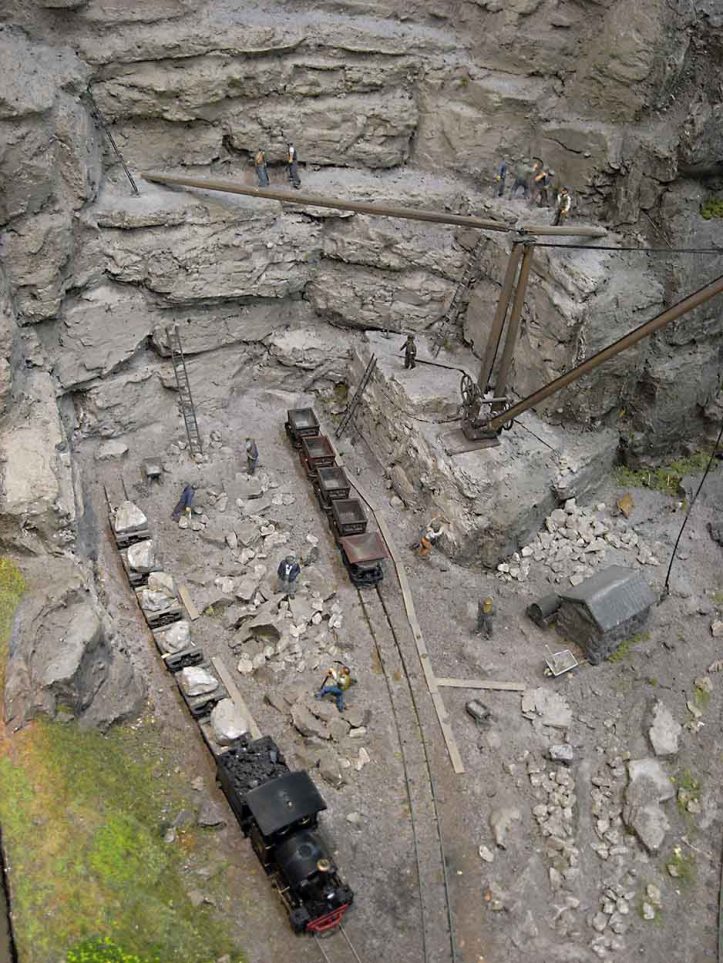 This is the stone cutting shed. 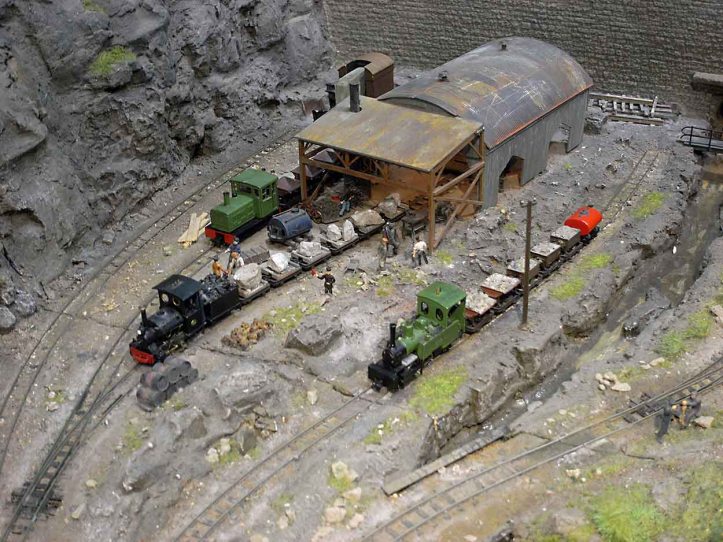 The inspiration comes from the Elan Valley and Grwyne Fawr near Abergavenny.

At the other end of the layout these is a ‘village’ of temporary accommodation for the quarry workers.

The sheer size of this layout is impressive and I admire the modellers for taking on a project of this magnitude. But, size isn’t the only impressive thing in this layout, the detailing is lovely too. Look at the tools lined up outside this shed.

For those people who like Scotland in winter, Noel and Myre Davies were showing Snow in the Glen. I first saw this O-16.5 layout at the Norfolk and Suffolk Narrow Gauge Modellers Open Day in Beccles in March of this year and I admit I’m a big fan of Noel and Myras modelling. The locos and stock are lovely.

The modelling is top notch.

The boiler house emits real smoke and, since the layout represents a sawmill, the smoke even has the smell of pine.

Look at the roof of the boiler house. Now that’s good modeling! 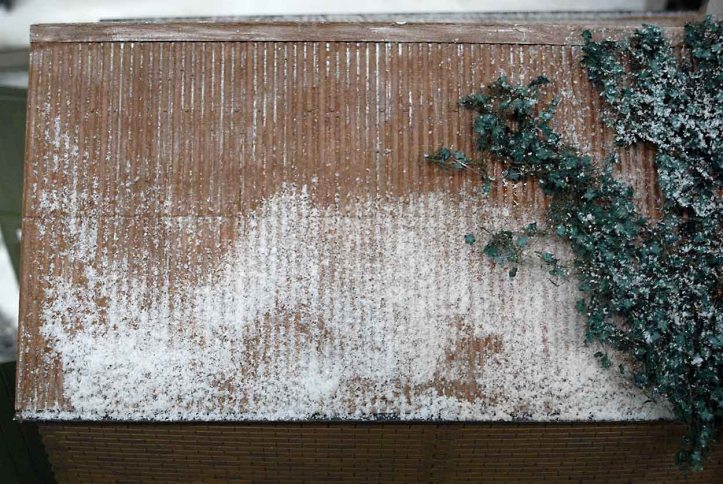 Myra is a figure painting maestro – look at her figures in the image at the top of this blog. She was giving a figure painting demonstration at the exhibition. On her workbench there were some Edwardian figures…

…and some baskets of fruit and veg.

She creates real depth in the figures and objects she paints. Myra told me she paints the figures black at first. Then she adds the colour as a wash. Finally, she adds a slightly lighter shade of the same colour as a second layer of wash. (If the top coat is a very light colour she will do a wash of white over the black before adding the two colour washes). I hope I got that right because I’m keen to try her technique – watch this space!

I am drawn to micro layouts in larger scales. Colin French’s O Gauge layout Ledsam Street Yard pulled me towards it and grabbed my attention. It is totally fictitious model of a small part of a larger industrial complex, sometime in the 1930s.

I had a really good chat with Colin about his approach to building micro layouts and how he made this layout. It was a very interesting conversation. Only after I left the exhibition did I realise I saw another of his micro layouts, Bishops Lane Brewery, at the Broadland Model Railway Club exhibition in Aylsham last year. I remember I was very impressed by Bishops Lane Brewery too.

Perhaps there’s something in modelling micro layouts in 7mm scale…